Uranus is the weirdest place among the eight Solar System planets — with its peculiar chemical composition, extreme temperatures, and the most unusual axial tilt. Here we’ll take a closer look at the planet’s oddities. For those who want to spot Uranus in the sky, we’ll also explain when is the best time to look for the planet. Let’s bring it on, shall we?

Uranus had been viewed multiple times over human history, but none of the observers recognized it as a planet before the 18th century. In 128 BC, the Greek astronomer Hipparchos might have recorded it as a star for his star catalog; centuries later, in 1690, English astronomer John Flamsteed made the same mistake and listed Uranus as 34 Tauri.

British astronomer William Herschel is considered the discoverer of Uranus. Although he also mistook it for another space object, his observation of Uranus on March 13, 1781, led to its discovery as a planet. Despite that Herschel mistook Uranus for a comet, other astronomers, noting its motion across the sky, suspected otherwise, and the object was soon accepted as a new planet worldwide. By 1783, Herschel himself admitted that the “comet” he discovered was, in fact, a planet.

How big is Uranus?

Uranus belongs to giant planets. Imagine this: if the Earth were a large apple, Uranus would be the size of a basketball. However, the ice giant doesn’t look large from the Earth — Uranus’ apparent size varies from 3.3" to 4.1", while Mercury, the smallest planet, can appear to us from 4.5" to 13".

How many Earths can fit in Uranus?

Uranus has a volume that is about 63 times the volume of the Earth which means that 63 Earths can fit inside Uranus. The ice giant is also four times wider than our planet. To better understand Uranus’ size, take a look at this image from NASA that shows the approximate sizes of the planets relative to each other.

The orbit of Uranus helped astronomers to discover Neptune. French scholar and polymath Pierre-Simon Laplace calculated Uranus’ orbit in 1783, but the planet escaped the predicted path. So astronomers supposed that there was some space body disturbing the motion of the blue-green ice giant. Due to this assumption, scientists predicted the unknown body’s distance from the Sun and its approximate mass and eventually discovered Neptune.

Uranus is tilted at 97.77°, which means that the planet’s axis of rotation is approximately parallel with the plane of the Solar System. The ice giant has the most significant axial tilt among the Solar System planets; in comparison, its neighbor, Neptune has an axial tilt of 28.5°.

A consequence of this is that near the solstices, one pole of Uranus continuously faces the Sun, leading to a very unusual day-night cycle across the planet. At the poles, one will experience 42 Earth years of day followed by 42 years of night. Meanwhile, around equinoxes, the Sun faces the planet’s equator giving it an average day-night cycle similar to other planets.

We don’t know for sure the reason behind such an extreme axial tilt. Scientists suspect that about 3 to 4 billion years ago, one or multiple impacts tipped the ice giant on its side. This encounter might have also caused Uranus’ retrograde rotation — together with Venus, the blue-green planet rotates clockwise. Meanwhile, the other Solar System planets rotate “normally” — in an anti-clockwise direction.

How long is a year on Uranus?

Uranus orbits the Sun every 84 Earth years. In 2033, the ice giant will complete its third orbit around the Sun since the moment of its discovery in 1781.

How long is a day on Uranus?

One Uranian sidereal day is 17 hours 14 minutes 24 seconds and, due to its great distance from the Sun, a single solar day there is about the same. This means that one Uranian year lasts for 42,718 Uranian solar days.

How far away is Uranus?

Uranus is the seventh planet from the Sun. Only Neptune is further (without taking into account the dwarf planet Pluto).

How far is Uranus from the Sun?

The distance from Uranus to the Sun is about 20 AU or 2 billion km (2 billion miles). This is just an average number, though; following an elliptical orbit, Uranus can reach the minimum and maximum distances from the Sun. They are called aphelion and perihelion, respectively. The distance between aphelion and perihelion is more extensive than that of any other planet — about 1.8 AU.

How far is Uranus from the Earth?

How long would it take to get to Uranus?

NASA’s Voyager 2 took nine and a half years to reach Uranus. The spacecraft was launched in August 1977 and made its closest approach to the ice giant on January 24, 1986. It is the only spacecraft that has ever visited Uranus, so we don’t know yet if there is a quicker way to reach the planet.

Voyager 2 is the only space probe that has studied Uranus. After almost a decade of traveling through space, in just six hours, NASA’s spacecraft gathered important information about the giant planet, its rings, and moons.

Several exploration missions to Uranus had been proposed, but by 2021, none of them got the final approval. For now, we receive information about the ice giant from observations via the Hubble Space Telescope and several powerful ground-based telescopes.

What is Uranus made of?

Along with its neighbor Neptune, Uranus is one of two ice giants of the Solar System. In fact, Uranus is a ball of gas and ice.

Uranus formed about 4.5 billion years ago when the rest of the Solar System took shape. The ices that formed Uranus and the other Jovian planets were abundant enough and allowed the giant planets to grow massive. Uranus most likely formed closer to the Sun and moved to the outer Solar System about 4 billion years ago, where it took its place as the seventh planet from the Sun.

Uranus consists of three layers: a small iron-nickel core in the center, an icy mantle in the middle, and outer gaseous hydrogen, helium, and methane atmosphere. More than 80% of the planet’s mass is made up of hot dense fluids of water, methane, and ammonia.

As an ice giant, Uranus doesn’t really have a solid surface. Its gaseous atmosphere transitions into the internal liquid layers. You can not walk or land on the planet’s surface because you’ll simply sink in it (just like on Jupiter).

Uranus is also is freezingly cold! It’s the coldest planet in the Solar System, even though it’s not the furthest one from the Sun. We don’t know why the ice giant doesn't have a lot of heat. Some scientists believe that the reason is its extraordinary tilt; others suggest that after the massive collision (mentioned above), most of Uranus’ inner heat has gone, leaving its core temperature depleted.

Like the other giant planets, Uranus has a moon system. While the other planets' moons take their names from Greek or Roman mythology, the Uranian ones are named after the characters of William Shakespeare and Alexander Pope’s works.

How many moons does Uranus have?

Uranus has 27 known moons. They stand out as the least massive moon system among those of the giant planets. For example, the combined mass of the five major satellites (Miranda, Ariel, Umbriel, Titania, and Oberon) would be still less than half that of Triton, the largest moon of Neptune, alone. To picture them even better, imagine that every single one of them has a smaller surface area than the continent of Australia.

The inner Uranian satellites consist of roughly half water ice and half rock. The composition of the outer ones remains unknown, but they might be captured asteroids.

What is Uranus' largest moon?

The largest Uranian moon is called Titania. With a diameter of 1,578 km (981 miles), it’s about half the diameter of the Earth’s Moon and also the eighth largest moon in the Solar System. Like our Moon, Titania is tidally locked to its partner, permanently showing only one side to Uranus. Titania’s reddish surface is covered with canyons and scarps; numerous impact craters can reach up to 326 km (203 miles) in diameter.

Uranian rings became the second planetary ring system to be discovered (after Saturn’s). Their discovery helped astronomers to realize that rings are a common feature for planets.

How many rings does Uranus have?

What are Uranus’ rings made of?

Uranian rings are made of water ice with the addition of some dark radiation-processed organics. A study of 2016 suggests that Uranus' rings, along with those of Saturn and Neptune, might be the remnants of Pluto-like dwarf planets that strayed too close to the giant planets. These dwarf planets were torn apart in the planets’ vast gravities and are today preserved as rings.

On November 14, 2023, at 00:32 GMT (on November 13, 2023, at 7:32 p.m. EST), Uranus will reach opposition. The planet will shine with a magnitude of 5.6 in the constellation Aries. Even at its biggest and brightest, Uranus will still be tricky to spot, so it’s better to search for it with at least a small telescope. The planet will be in the best position to observe at around midnight local time.

What color is Uranus?

The methane in the Uranian atmosphere makes the planet look blue-green. The ice giant looks similar to Neptune; however, Uranus appears greener.

How did Uranus get its name?

The discoverer of Uranus William Herschel wanted to name the new planet “George's Star” for his patron, King George III; however, this name wasn’t appreciated outside England. Eventually, German astronomer Johann Elert Bode, whose observations helped to identify the newly discovered object as a planet, named Uranus after an ancient Greek god of the sky.

Is Uranus a gas giant?

Uranus is an ice giant because it is mainly composed of ice and rocky materials. Saturn and Jupiter contain more gas, so they’re called gas giants.

Now you know why Uranus is the weirdest planet in the Solar System. If you liked this article, don’t hesitate to share it on social media. And don’t forget to watch our cartoon about Uranus! 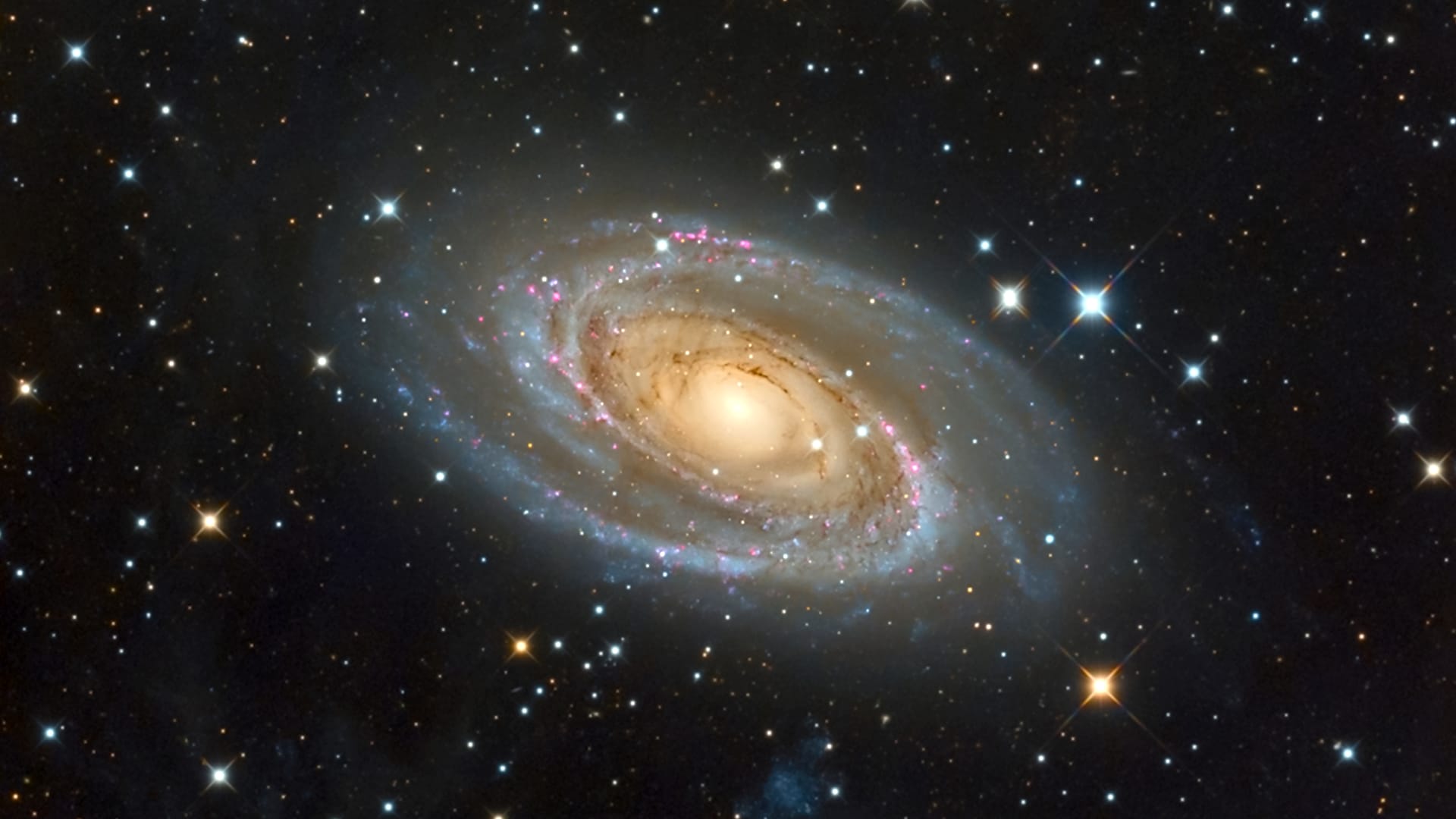 From this article, you’ll learn more about deep-sky objects. The list of galaxies and star clusters visible in February is included!