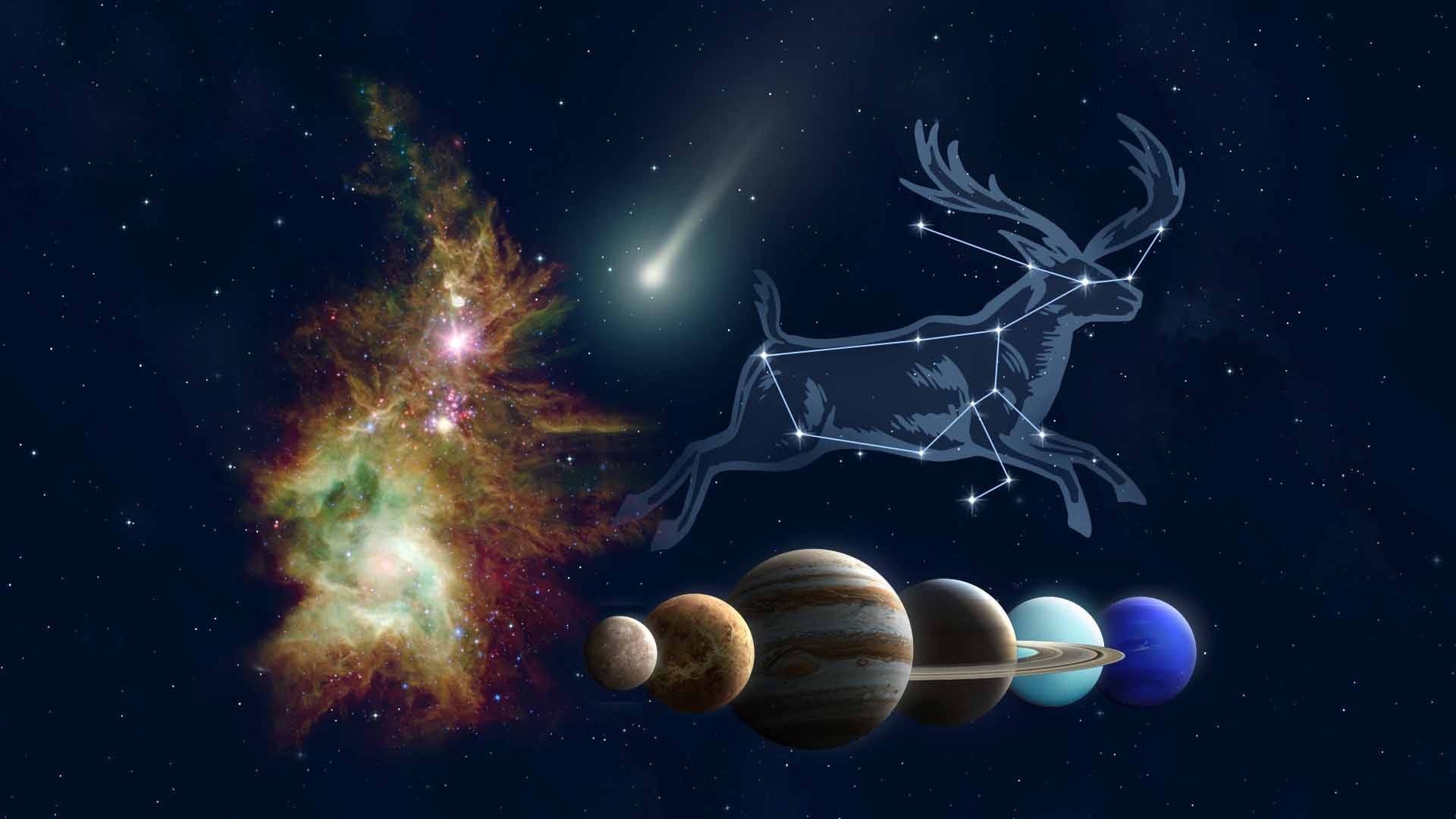 The last week of December 2021 has prepared many gifts for astronomy lovers, including a parade of six planets, shining star patterns, the bright comet Leonard, and a Christmas Tree in the sky. Keep reading to learn what to see in the sky on the Christmas holidays.

In this article, the events are ranged according to their visibility. First, you’ll find events or objects that are easy to see with the naked eye; then — those that require optics. At the end of the article, we explain the easiest way to navigate across the sky. Don’t skip this part — you’ll find a Christmas gift there!

Six planets — Mercury, Venus, Saturn, Jupiter, Neptune, and Uranus — will line up in the sky from December 28 to January 3, shortly after sunset. Venus and Jupiter are more luminous than the brightest stars, so they can be easily seen with the naked eye; Saturn and Mercury are also within the unaided eye visibility; Neptune and Uranus require a pair of binoculars or a telescope.

Start observations from the evening of December 28, 2021, when Venus and Mercury are at the closest approach in the sky. You will need a flat, free horizon, as the duo stays very low, close to the Sun. At about 40 minutes after sunset, look southwest from the Northern Hemisphere and west if you’re in the Southern Hemisphere. Mercury (magnitude -0.7) will appear very close to the bright Venus (-4.3).

When Venus and Mercury go down to the horizon, look up to find Jupiter (-2.0). Midway between it and Venus, you’ll see Saturn (0.9). While they’re bright enough to be seen in twilight, you’ll need to wait until complete darkness for Neptune and Uranus. After nightfall, grab your binoculars and start looking for the faint planets: Uranus (5.7) in the constellation Aries and even dimmer Neptune (7.9) in the constellation Aquarius. The only “shy” planet that will be hiding from our view these evenings is Mars.

Throughout December, the trio of Jupiter, Saturn, and Venus has been a fantastic scene. But the last week of 2021 might be your last chance to view them lining up in the sky, as Venus is going towards inferior solar conjunction when the planet becomes unobservable for some time.

Let’s hop from planets to star patterns. December is an excellent month for stargazing for the northern latitudes, as nights there are longer and darker than usual!

Here is a new exciting target for stargazers — the constellation Rangifer! Or should we say “old”? French astronomer Pierre Charles Le Monnier created Rangifer in the 18th century, but it wasn’t included in the 88 officially recognized constellations list, so now it’s considered extinct.

In Latin, Rangifer means “reindeer”. Will you find reindeer in the sky these Christmas nights? Even though this constellation is gone from the modern star charts, its stars remain in the sky — they’re located in the region between Polaris and Cassiopeia, where Camelopardalis and Cepheus reside. As many of these stars are faint, you’ll need a dark location for better observations.

Use your imagination to see more star patterns in the sky. For example, some observers claim that the well-known constellation Orion looks like a Christmas package for them. Its four bright stars make up the package, and three close together and in a straight line put together the bow. Who knows, maybe you’ll find some more Christmas-related figures in the sky.

Speaking of Christmas decorations, observers with a pair of binoculars or a telescope can find the Christmas Tree Cluster around December 25 (and any other December-January night). It’s also visible to the naked eye with a condition of dark skies and sharp eyesight.

The Christmas Tree Cluster is a part of the NGC 2264 (magnitude 3.9), together with the Cone Nebula and the Fox Fur Nebula. The cluster very clearly resembles a Christmas tree with its triangular shape, glowing red clouds, and blue cosmic baubles. Look for the tree in the constellation Monoceros, where the bright variable star 15 Monoceros marks its trunk.

These nights, spot the Christmas comet Leonard, the brightest one of 2021. It reached maximum brightness on December 12 and is currently tricky to see without binoculars. On Christmas Day, December 25, Comet Leonard will be visible from the Southern Hemisphere in the constellation Microscopium. Start looking for the comet in the morning, before sunrise.

How to spot space objects in the sky?

The easiest way to find out where to look for planets, stars, or deep-sky objects is to use our stargazing apps — Star Walk 2 or Sky Tonight. Just open the search via the Magnifier icon and put the name of a celestial body into the search field. To spot the Christmas Tree cluster, look for the NGC 2264 — the cluster is placed within this region.

We arrange a special sale to celebrate Christmas — from December 24 to January 2, 2022, get Star Walk 2 for up to 70% off. And not only that! The All-in-One bundle is also available with up to a 70% discount during this period. The bundle includes upgraded planets and constellations, extended Solar System information, deep-sky objects and satellites, space cartoons, and impressive 3D visualizations. Enjoy Star Walk 2 with no limits!

Enjoy stargazing during Christmas nights and share your experience with us on social media. By the way, how do you like the frost effect on the picture at the top of the page? Do you remember where it came from? Actually, we have a story about a big failure related to the effect — read it on our Vito Technology blog.

We wish you clear skies and a Merry Christmas!