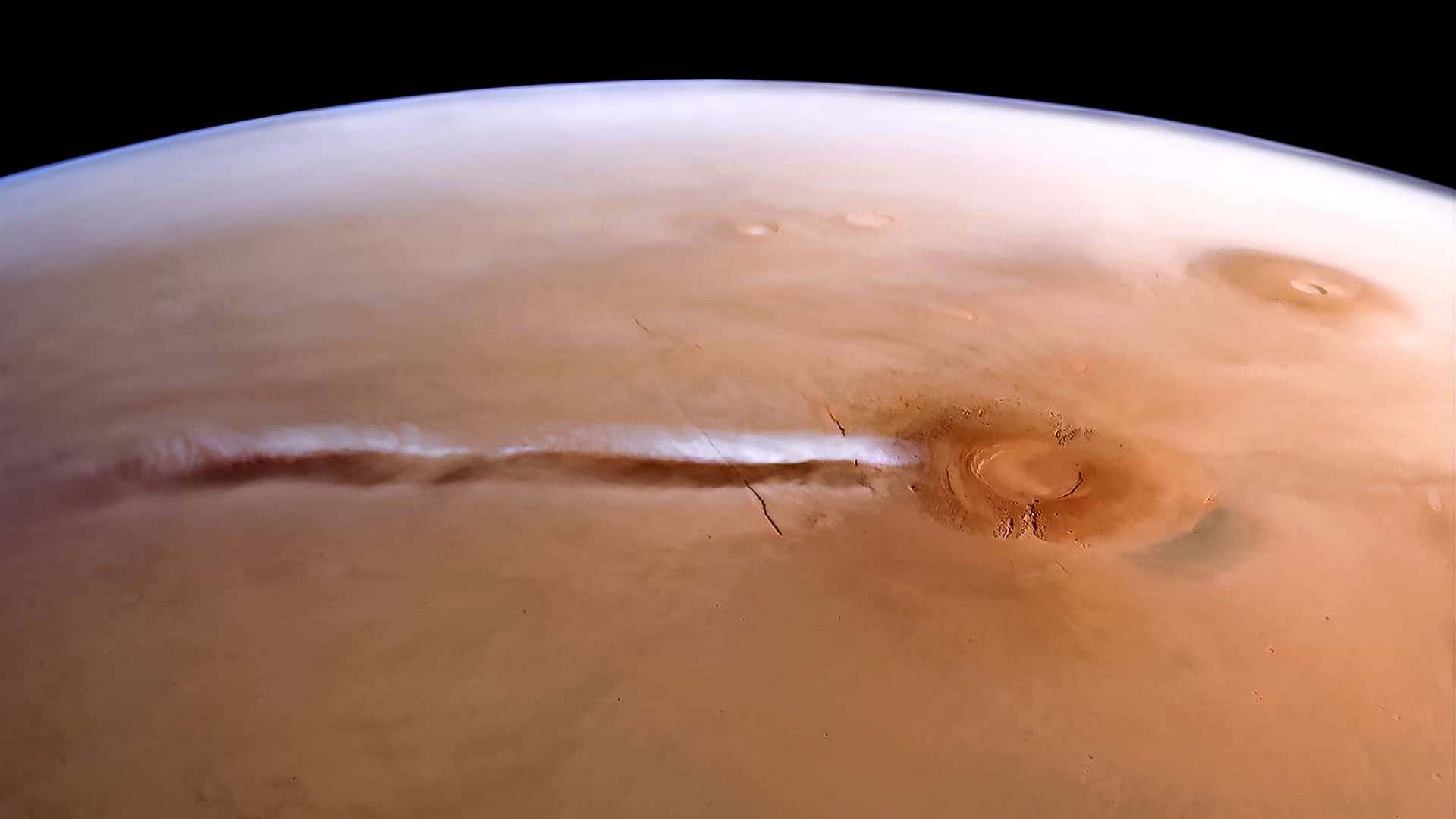 The mysterious, thin, elongated cloud was noticed on Mars again in mid-July. We asked you on Twitter if you wanted to know more about this curious phenomenon and 94% voted yes. So we gathered the facts that are known so far. Enjoy!

What is the Arsia Mons Elongated Cloud?

The Arsia Mons Elongated Cloud (AMEC) is a lee cloud that is spotted over the 20-kilometers (12 miles) high Arsia Mons dormant volcano on Mars. The cloud has a tail-like structure, consists of water and ice and can gain over 1,800 kilometers (1118 miles) in length. Its size changes throughout the Martian day — in the morning it grows longer, parallel with the equator. Martian day, called “sol”, is 24 hours, 39 minutes and 35 seconds of the Earth’s day.

AMEC forms every Martian year (equals 687 days on the Earth) around the southern solstice and reappears every day for 80 sols or even more. The southern solstice happens when the Sun is in the southernmost point in the Martian skies, just like the December solstice on the Earth. Each Mars morning, when the cloud appears, it forms and fades over a few hours, which makes research difficult. It can’t be noticed during the afternoon when most spacecraft in orbit around Mars tend to observe. This is why this cloud was only captured by the Visual Monitoring Camera (VMC) carried by Mars Express. This camera can photograph an unusually wide area of the planet in a single frame. Together with the highly elliptical orbit of the spacecraft, it lets Mars Express take pictures of the Arsia Mons Cloud.

What caused this cloud?

No, there is no volcano eruption on Mars, Arsia Mons was last active 50 million years ago. Despite the location, AMEC is not the result of a volcano’s activity, but a meteorological phenomenon that regularly occurs on Earth as well. Lee clouds are caused by standing atmospheric waves. When stratified air is forced to move from a down point to a higher one, the air cools and the condensation forms clouds. Typical clouds move across the sky, but a lee cloud is tied to the landscape feature that formed it. They always occur on the leeward side of the landform object, typically a mountain, or air stream causing them.

If you have any topics you want us to write about, please, let us know on social media. Stay with us and you won’t miss out about the most exciting events in the world of astronomy.