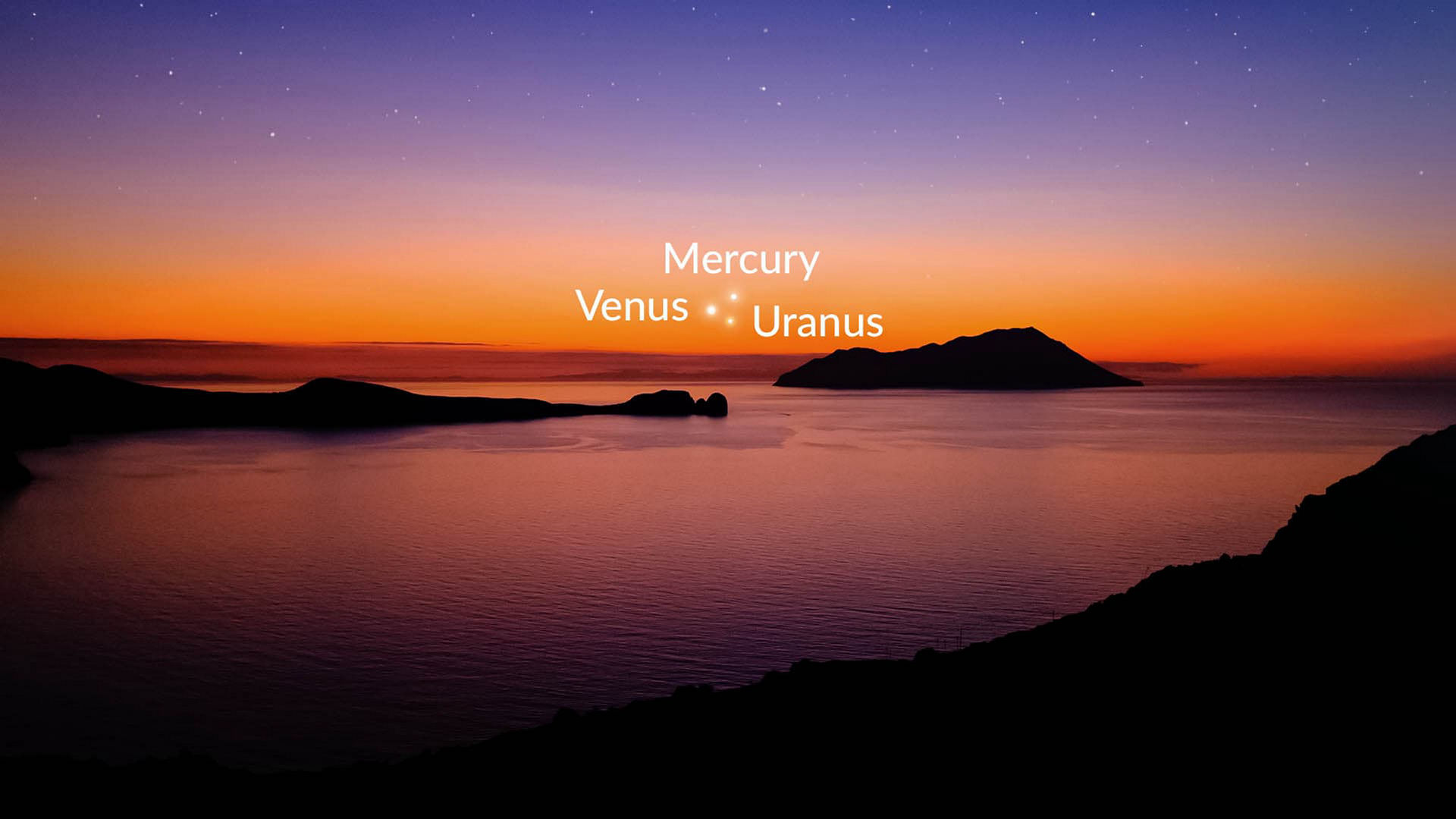 From April 24 to 26, watch the three planets meet up in the skies — they won't be easy to observe, so get ready for a challenge. In today’s article, we’ll tell you where and when to look for the trio and also give some tips for the best observation. Let’s get started!

Where is Venus now?

On March 26, 2021, Venus reached superior solar conjunction, starting its transition from the morning star to the evening sky object. The planet has been unobservable for several weeks and still remains a hard-to-spot celestial body. It stays close to the sunset glare and sets together with the Sun before dark. By May, glorious Venus will return to our evening sky and remain there for the rest of this year.

The good news for observers is that Venus is relatively bright — it ranks as the third brightest celestial object after the Sun and Moon, respectively. Learn more about the amazing planet Venus from our recent article.

Mercury near the Sun

Mercury won’t be easy to see in April as well, as it transits from the morning to the evening sky. The speedy little planet is eight times dimmer than Venus but currently shines as bright as Sirius — the brightest star in the night sky. On April 19, 2021, this planet also passed very close to the Sun in the skydome, reaching superior solar conjunction. After that, Mercury started its path away from sunset to swing to its greatest eastern (or evening) separation from the Sun on May 17, 2021. Till this time, Mercury will stay nearby Venus in the evening sky. From the Northern Hemisphere, the planet will become visible after sunset at the end of April. May will be the best month for observers from these sites to view Mercury in the evening sky.

Where is Uranus tonight?

Uranus is also very close to the Sun, waiting for its solar conjunction that will happen on April 30, 2021, at 15:44 EDT (19:44 GMT). At closest approach, Uranus will appear 0°24' from the Sun and become unobservable for several weeks, being lost in the Sun's glare.

At around the same time, Uranus will be most distant from the Earth because these two planets will be placed on opposite sides of the Solar System. After the solar conjunction, Uranus will reappear to the west of the Sun and become visible in the predawn sky for a longer period.

All three planets will be visible together on April 24, after sunset. Later, Uranus will move away from the brighter neighbors and stay closer to the Sun. Meanwhile, keep watching Venus and Mercury pairing up on April 25 and 26.

Observers from the Northern Hemisphere will have a better view since the planets will stay out longer after sunset there. At southerly latitudes, the trio will set sooner. And no matter your location, remember to find an unobstructed horizon and watch in the direction of the sunset. Be careful, and don’t aim binoculars directly at the Sun! Check the weather in advance — clear skies are necessary to view the planets. The observation window will be short, so use Star Walk 2 to see the planets’ position in the sky; pick the best viewing time with the help of the Time Machine feature.

Viewing Venus, Mercury, Uranus these days is genuinely challenging, so don’t worry if you miss them in April. You’ll get a second chance to see a conjunction of Venus and Mercury at the end of May. At that time, the two planets will climb up higher after sunset and stay out longer. Even though Uranus will stay quite far from Venus and Mercury, the chances to see it will be better.