The Moon, Saturn and Jupiter meet in the night sky 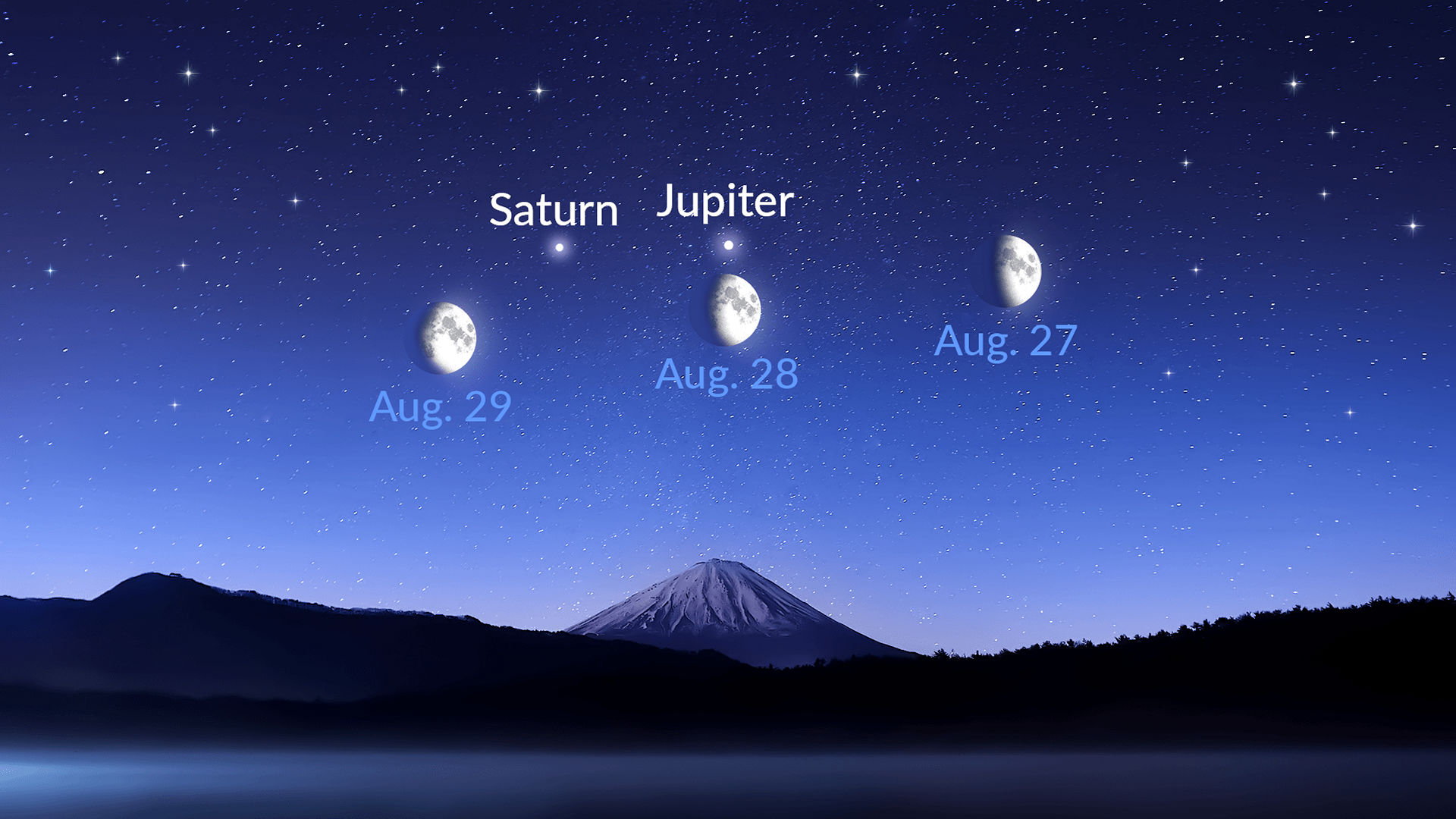 Once again the world can witness the reunion of three bright celestial bodies: the Moon, brilliant Jupiter, and golden Saturn. Read on to find out how to observe this prominent trio and determine the best viewing time.

The Moon dances with Jupiter and Saturn

The Moon will make a close approach to the largest planet of the Solar system, Jupiter, on August 29, 2020, at 01:43 GMT (at 21:43 EDT on August 28). The Moon will shine at a magnitude of -12.4, while Jupiter will be at a magnitude -2.6. On the same day several hours later, at 16:59 GMT (at 12:59 EDT), the other gas giant, Saturn (whose magnitude will be 0.1), will join this astronomical duet. Three celestial bodies will meet in the constellation Sagittarius, where Jupiter and Saturn will remain till the end of this year.

You can spot the trio in the southern part of the sky at dusk. Look for the waxing gibbous Moon to easily find bright gas giants shining next to it. Jupiter and Saturn can be seen by the unaided eye or through a pair of binoculars. You won’t mix up these planets as white, brilliant Jupiter is about 8 times brighter than golden, dimmish Saturn. An amateur telescope will help you to observe Jupiter’s Galilean moons (Io, Callisto, Ganymede, and Europa) and the Great Red Spot, along with Saturn’s amazing rings and natural satellites.

The brilliance of Jupiter and Saturn is the result of two factors: their large size and high reflectivity also called albedo (Latin for “whiteness”). Being the largest planets of our Solar system, Jupiter and Saturn reflect about 52% and 47% of the sunlight, respectively. The Moon can’t compete with them, reflecting only 12% of the sunlight, but it’s much closer to Earth, which makes it appear so bright in the night sky.

Check the rise and set times for the Moon and gas giants in the Star Walk 2 app. Also, the application will help you to locate them in the sky. Activate the AR Mode to enjoy the Moon, Jupiter, and Saturn shining over your current location among constellations and brilliant stars.

The Moon at aphelion

Also, the Moon will pass the aphelion — the furthest point from the Sun in its orbit on August 31, 2020, at 02:37 GMT (at 22:37 EDT on August 30). While at aphelion, the Moon lies at a distance of 1.0118 AU from the Sun. Usually, the Moon passes this point at the same time that it reaches its full phase, being on the opposite side of Earth from the Sun.

The next Full Moon will adorn the sky on Wednesday, September 2, 2020. The Full Corn Moon will be the last one to occur between the summer solstice and the autumn equinox. Follow us and you won’t miss the last Full Moon of this astronomical summer!