See the Moon Shining Close to Mercury, Venus, and Spica 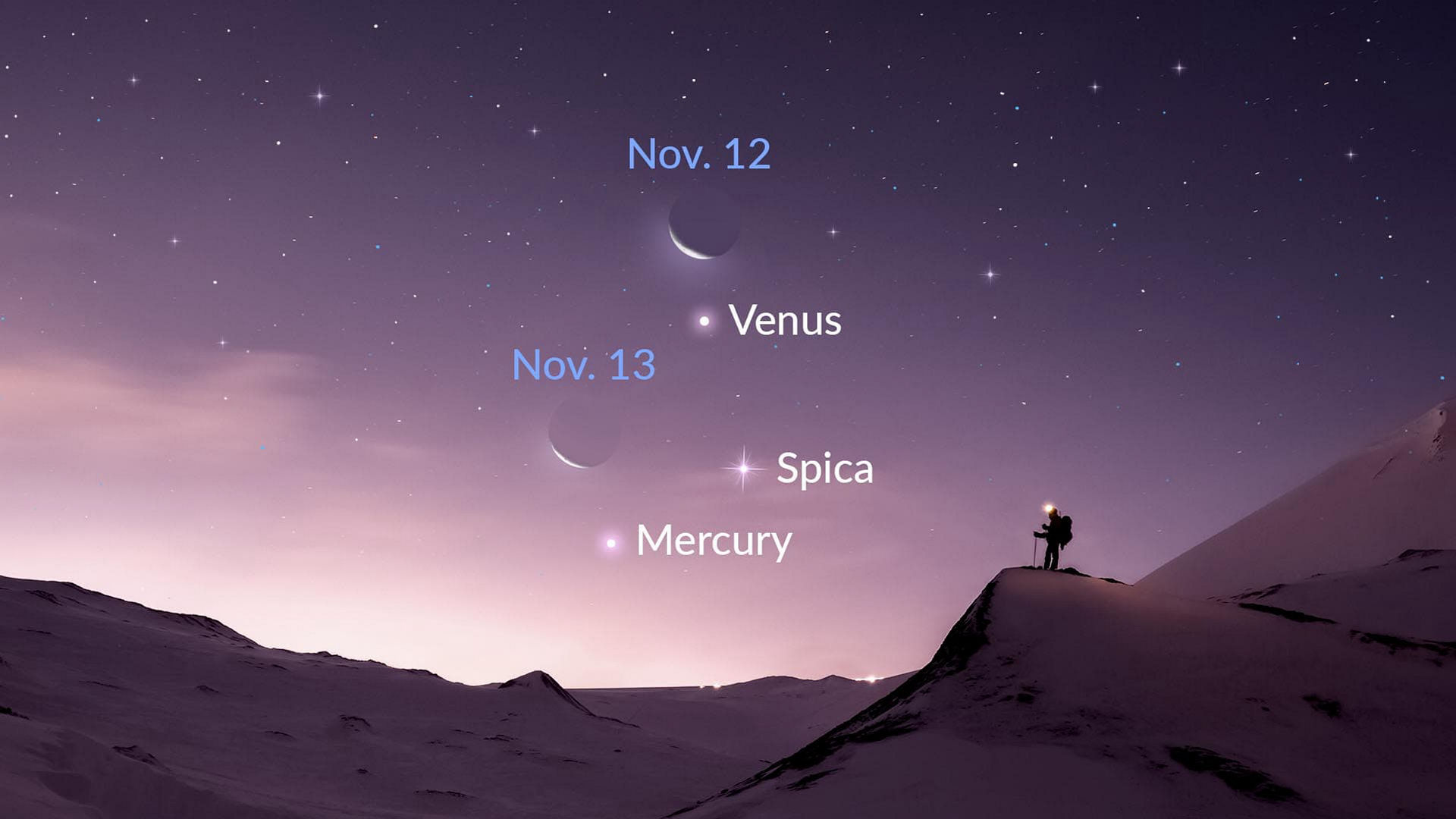 On November 12 and 13, the waning crescent Moon shines close to the planets Venus and Mercury and the brightest star in the constellation Virgo, Spica. Read our article to learn how, where, and when to observe the spectacular astronomical gathering in the sky above you.

Conjunction of the Moon and Venus

The Moon and Venus, the second- and third-brightest heavenly bodies (after the Sun), are easy to find. Look for them in the eastern part of the morning sky before sunrise. The celestial objects can be seen with a naked eye. You can also use binoculars to get a better view, but the Moon and Venus won't fit together within a telescope's field of view.

Conjunction of the Moon and Mercury

The next day — on November 13, 2020 — at 3:44 p.m. EST (20:44 GMT), traversing the constellation Virgo, the Moon will pass close to the speedy little planet Mercury. The Moon will be at a magnitude of -9.0, while Mercury will shine at a magnitude of -0.7. The observers from the Northern Hemisphere can see Mercury more easily; the smallest and innermost planet rises about an hour before sunrise. On November 10, Mercury reached its greatest separation from the Sun and peak visibility. The planet is still placed perfectly to observe — so don't miss the opportunity to enjoy its amazing apparition!

There's a 1st-magnitude star shining close to the brilliant trio of the Moon, Mercury, and Venus these days. The brightest star in the constellation Virgo named Spica joins the beautiful astronomical gathering on November 12 and 13. Don't mistake Spica for Mercury. Mercury is about four times brighter than Spica, but the light of the dawn might outshine the speedy planet. You can also use the Moon to distinguish between them: the Moon's illuminated side is closer to Mercury than to Spica.

Spica is the fifteenth brightest star of the night sky. It is a brilliant binary star, whose both components are larger and hotter than the Sun. Spica lies at a distance of about 262 light-years from the Earth. The star's name derives from the Latin phrase meaning "Virgo's ear of grain (wheat)". In Greek and Roman mythology, Virgo represented Demeter (or Ceres), the goddess of the harvest, while Spica was associated with the ear of wheat that the goddess holds in her hand.

Use the stargazing guide Star Walk 2 to easily find the Moon, Mercury, Venus, Spica, and the constellation Virgo in the sky above you. Type the name of a celestial object in the search field and enjoy its view! Learn more interesting facts about it by tapping on its name in the lower part of your screen.