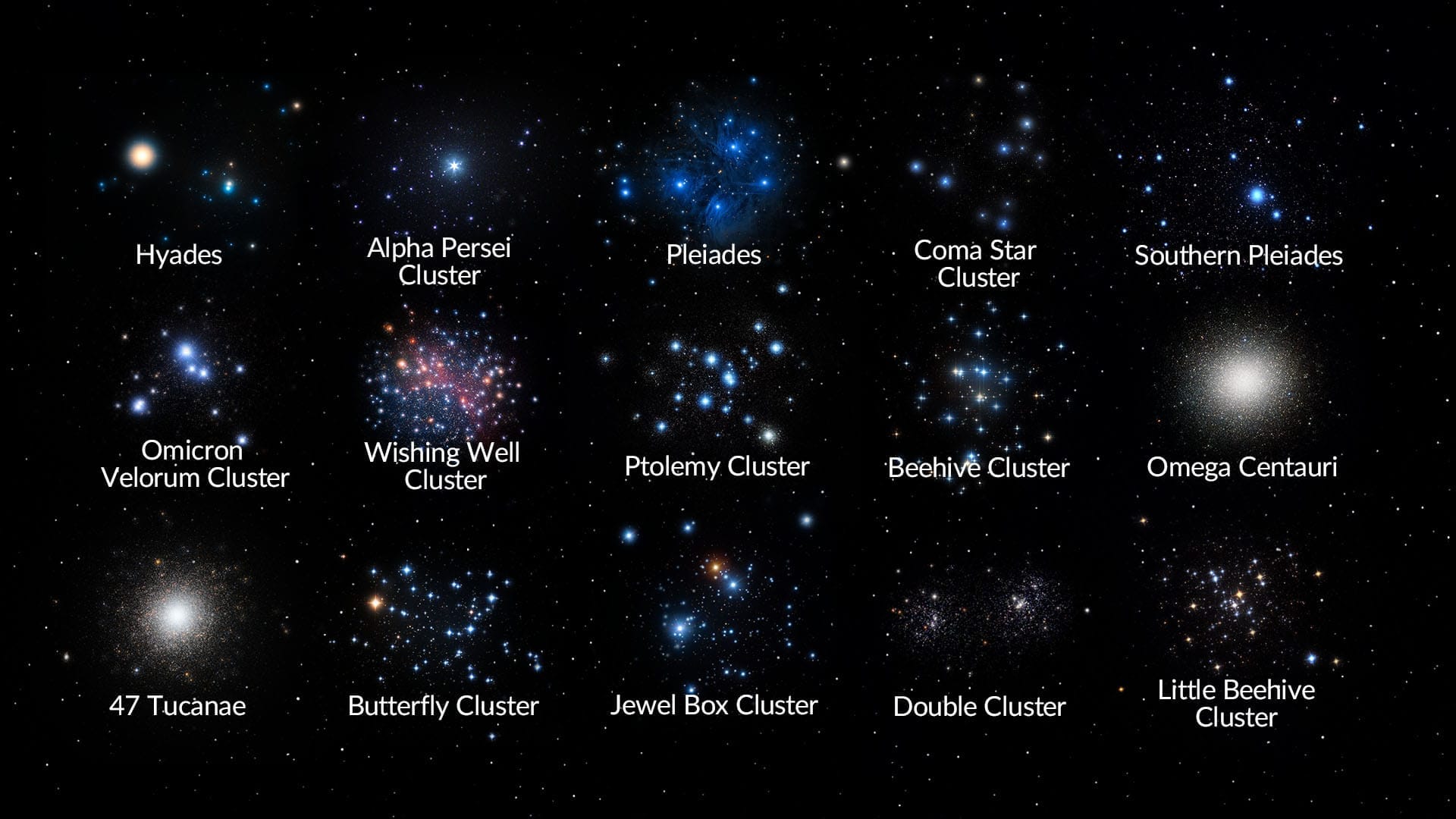 Everyone can do deep-sky observations. To prove the point, we listed here 15 star clusters that are easy to see even with the naked eye. That’s right, you don’t need a fancy, high-cost telescope to view objects that are trillion kilometers away from us. Get ready to learn more about star clusters, and let’s get started!

First of all, let’s find out the meaning of the term. A star cluster is a large group of stars whose members are held together by mutual gravitational attraction. Not to be confused with galaxies that are also gravitationally bound groups of stars. To distinguish these space objects, keep in mind that galaxies are way more massive. A typical (globular) star cluster contains a mass of 100,000 Suns, while the Milky Way galaxy has nearly 1 trillion solar masses.

Star clusters are divided into two main types: globular and open ones. The difference between them is significant.

What is a globular cluster

Globular clusters are old, usually spherical groups of stars that can contain from a few thousand to a million members. The most well-known examples are 47 Tucanae and Omega Centauri.

What is an open cluster

Open clusters, on the contrary, are much younger and smaller; they contain hundreds or thousands of stars. These star clusters tend to lose a gravitational bound over time and spread out, becoming loosely clustered. Due to this, they are more irregular in shape. You can notice this by observing the Pleiades, Hyades, or Beehive Cluster.

How to find cluster of stars in the sky

There are three main ways to spot literally any sky object: to read a guide, use a sky map, or get an astronomy app. For the first method, you need an instruction on how to find a specific cluster with orientation on a specific star. Don’t forget that the sky looks different from different hemispheres, so finding a comprehensive guide is quite difficult. The second way requires websites — like SkyMap or Sky-Map.org. They don’t work offline, therefore it's not the most convenient method for those who want to ride away from city lights. For the third way, you just need to download an astronomy app.

If you’re not an experienced observer but want to feel the charm of the starry sky, use Star Walk 2 — its beautiful and unique graphics will immerse you in the world of astronomy.

If you already have some knowledge of astronomy, don’t want to get distracted by an app, and need an easy-to-use tool, download Sky Tonight. Unlike Star Walk 2, it shows all space objects for free. Sky Tonight is especially useful for deep-sky observers as it offers a large database of DSOs.

Both apps work even without an internet connection, so you can go somewhere away from city lights and still be able to use them.

In this list, the star clusters are arranged by their apparent magnitude starting with the brightest one.

Note that the limiting magnitude that the average human eye can discern is approximately 5.5 in suburban skies (class 5 on a Bortle scale). In the city sky (class 8) you’ll barely view objects with an apparent magnitude of 4.0. To see more, you can use binoculars or find darker skies.

The Hyades or Collinder 50 is the nearest and best-studied open star cluster. About a dozen of the bright Hyades’ stars are visible to the naked eye! To find them, look for the V-shaped group of stars in the evening; the bright reddish star Aldebaran is located nearby.

The easiest way to find Collinder 39 is to locate its brightest member, Alpha Persei or Mirfak, which is also the brightest star in the constellation Perseus. In the Northern Hemisphere, this star cluster is above the horizon every night of the year, although it stays very low in spring.

The Pleiades, or the Seven Sisters, is probably the most famous star cluster — it is bright, beautiful, easy to see, and visible from all over the world. To find Messier 45, gaze overhead at about midnight and look for a tiny dipper-shaped group of stars.

The most outstanding feature of the constellation Coma Berenices, the Coma star cluster, is easy to find at about 9:30 p.m. on an April evening. Look for the bluish-white letter “V” that is formed by faint, almost wispy stars.

Wait about an hour after sunset to see the southern namesake of the famous Pleiades. IC 2602 is 70% fainter than its northern counterpart but still an easy target for the unaided eye. It’s also visible only from the southern latitudes (hence the name).

The star cluster Omicron Velorum takes its name from the brightest of its members. It is a less popular naked-eye object than the other star clusters in the list, but IC 2391 is surely well visible — even our ancestors observed it and described it for the first time in 964.

In 1990, the Wishing Well Cluster became the first target the Hubble Space Telescope ever observed. Through binoculars or a telescope, NGC 3532 resembles silver coins at the bottom of a well (hence its nickname); to the naked eye, it appears as a hazy patch in the sky.

Messier 7 is easy to see in the Southern Hemisphere, where it reaches the highest point in the sky at around midnight in mid-June. However, in the northern latitudes, it appears low, so you’ll need an unobstructed horizon to view it from there.

To find the Beehive star cluster, you should remember that it climbs higher in the evening sky throughout the northern winter and early spring, disappears in the Sun’s glare in June-August, and returns to the morning sky in September.

Omega Centauri is the largest and brightest globular cluster in the Milky Way galaxy, one of very few Milky Way’s globular star clusters visible to the naked eye. It looks like a faint and fuzzy star, best observable in the southern latitudes, but also visible in the evening sky from the Northern Hemisphere.

The second biggest and brightest globular star cluster 47 Tucanae has an extremely dense core that you can see via binoculars. To the naked eye, it appears as a slightly blurred star, similar to the head of a tailless comet. Even its discoverer initially mistook it for a comet!

The neighbor of the above-mentioned Messier 7, Messier 6 is a smaller group of stars that looks like a swarm of fireflies through binoculars. To the naked eye, this cluster appears like a nebula without stars.

The brilliant Jewel Box star cluster has about a dozen stars in various shades of blue, yellow, and orange; to the naked eye, it appears as a fuzzy star. You can easily recognize the cluster by its A-shaped asterism formed by its four brightest stars.

The Double Cluster contains two separate star clusters that appear as a single large hazy patch to the naked eye. The cluster is hard to see when it’s close to the horizon, so if you can’t see it yet, wait until it rises higher.

Messier 41, sometimes referred to as the Little Beehive star cluster, is located near Sirius, the brightest star in the night sky. You need to look for a faint object that looks fuzzy and differs from pinpoint stars.

Bottom line: now you know at least 15 beautiful star clusters that can be seen without special equipment. On the next clear evening, go outside and try to spot some of them! Also, share this article with your friends if you found it useful.

For a better visual representation, check out the colorful photos of some of the star clusters from this list on our Instagram account. Note that even via optics, your eyes can’t see the deep-sky objects the way they appear in professional images.