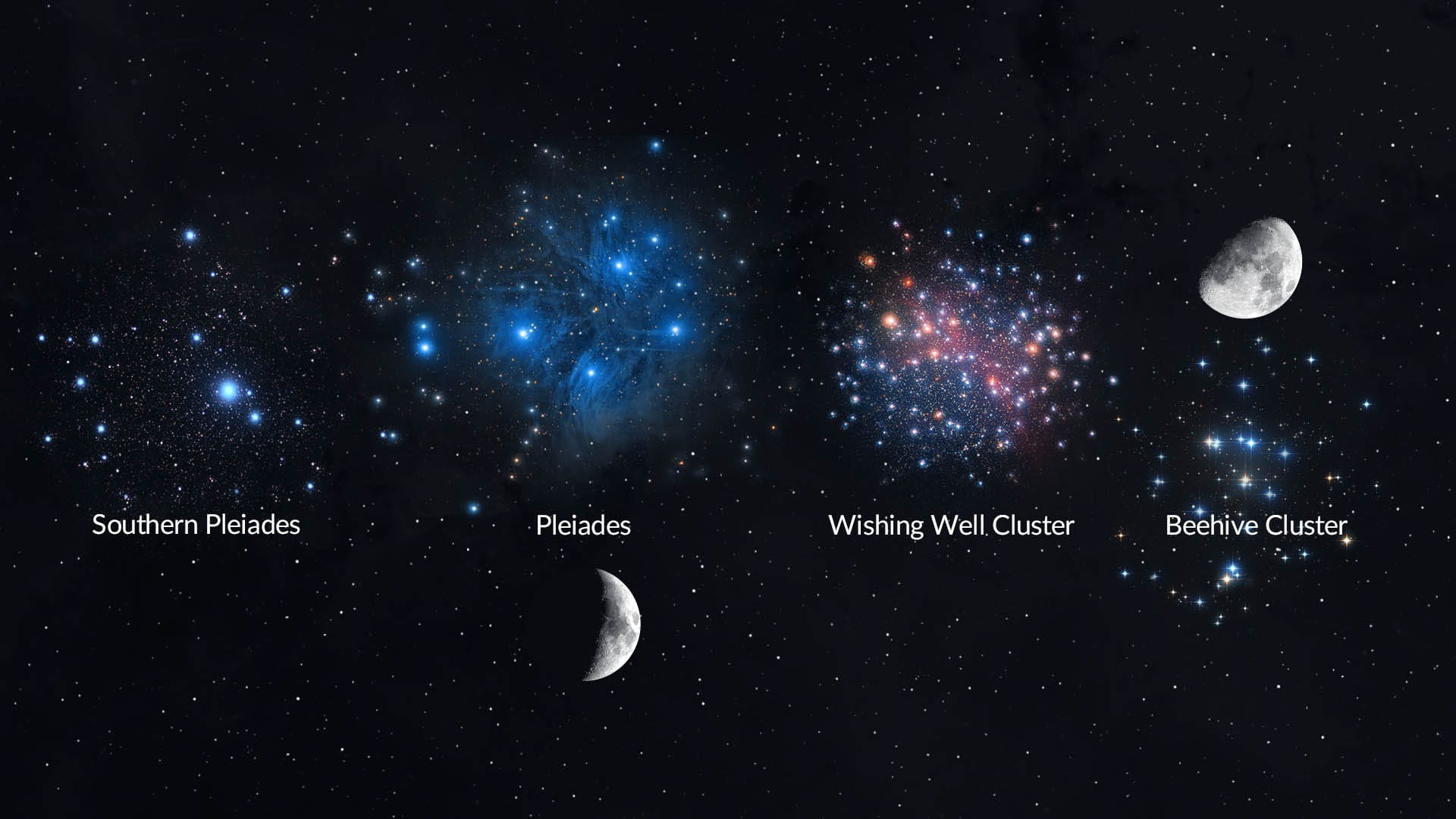 Star clusters (along with galaxies and nebulae) belong to the category of “deep-sky objects” — faint space objects that lie outside our Solar System. In this article, we’ll tell you about four star clusters that you can see this March; two of them will be accompanied by the Moon!

The Southern Pleiades (also known as IC 2602 or Theta Carinae Cluster) is an open star cluster in the constellation Carina. As you can guess from its nickname, this star cluster is only visible in the Southern Hemisphere. With the magnitude of 1.9, it’s fainter than its Northern counterpart — the Pleiades in Taurus — but can still be spotted with the naked eye. However, it’s best to use binoculars or a telescope for its observation. On March 3, the Southern Pleiades will rise high in the sky at around midnight local time.

You can easily locate this deep-sky object with the Sky Tonight app. Tap the magnifier icon, type “IC 2602” in the search field, and then tap the target icon — you’ll see the current position of the Southern Pleiades.

March 8: The Pleiades and the Moon

The Pleiades (also known as M45) is a beautiful open cluster in the constellation Taurus. It’s not only one of the closest star clusters to us, but also the nearest Messier object — its distance from the Earth equals about 444 light-years. The Pleiades are easy to spot in the sky — to the naked eye, they look like a fuzzy little “dipper” composed of six bright stars. With a pair of binoculars, you’ll be able to see more stars in the cluster. On March 8, the bright Pleiades (magnitude 1.2) will be accompanied by the waxing crescent Moon in the sky. Our natural satellite will be positioned 3.8° away from the star cluster at the closest approach.

What’s bigger: lunar distance, astronomical unit, or light-year? How are these units used? Check out our infographic to find these out!
See Infographic

The Wishing Well Cluster (also known as NGC 3532 or Pincushion Cluster) is an open star cluster in the constellation Carina. Historical fact: it was the first target that the Hubble Space Telescope ever observed. On a clear dark night, you’ll be able to see NGC 3532 with the naked eye as a hazy patch in the sky. Through binoculars or a telescope, this stunning deep-sky object looks like a collection of silver coins scattered about the bottom of a well — hence one of its nicknames. If you live in the Southern Hemisphere, take a chance at observing the Wishing Well Cluster on March 9. It will climb high in the sky at around midnight local time and have an apparent magnitude of 3.

March 14: The Beehive Cluster and the Moon

The Beehive Cluster (also known as M44, NGC 2632, or Praesepe) is an open star cluster in the constellation Cancer. Another historical fact: in 2012, astronomers found planets orbiting Sun-like stars in this very cluster. These were the first planets ever discovered in a dense stellar environment.

Under favorable weather conditions, the Beehive Cluster (magnitude 3.7) can be seen with the naked eye as a blurry patch of light in the sky. With 10x50 binoculars, you should be able to see up to 20 stars in the cluster. We suggest you try to observe the Beehive Cluster on March 14, when it will pair up with the waxing gibbous Moon in the sky. At the closest approach, the Moon will be positioned 3.7° away from the star cluster.