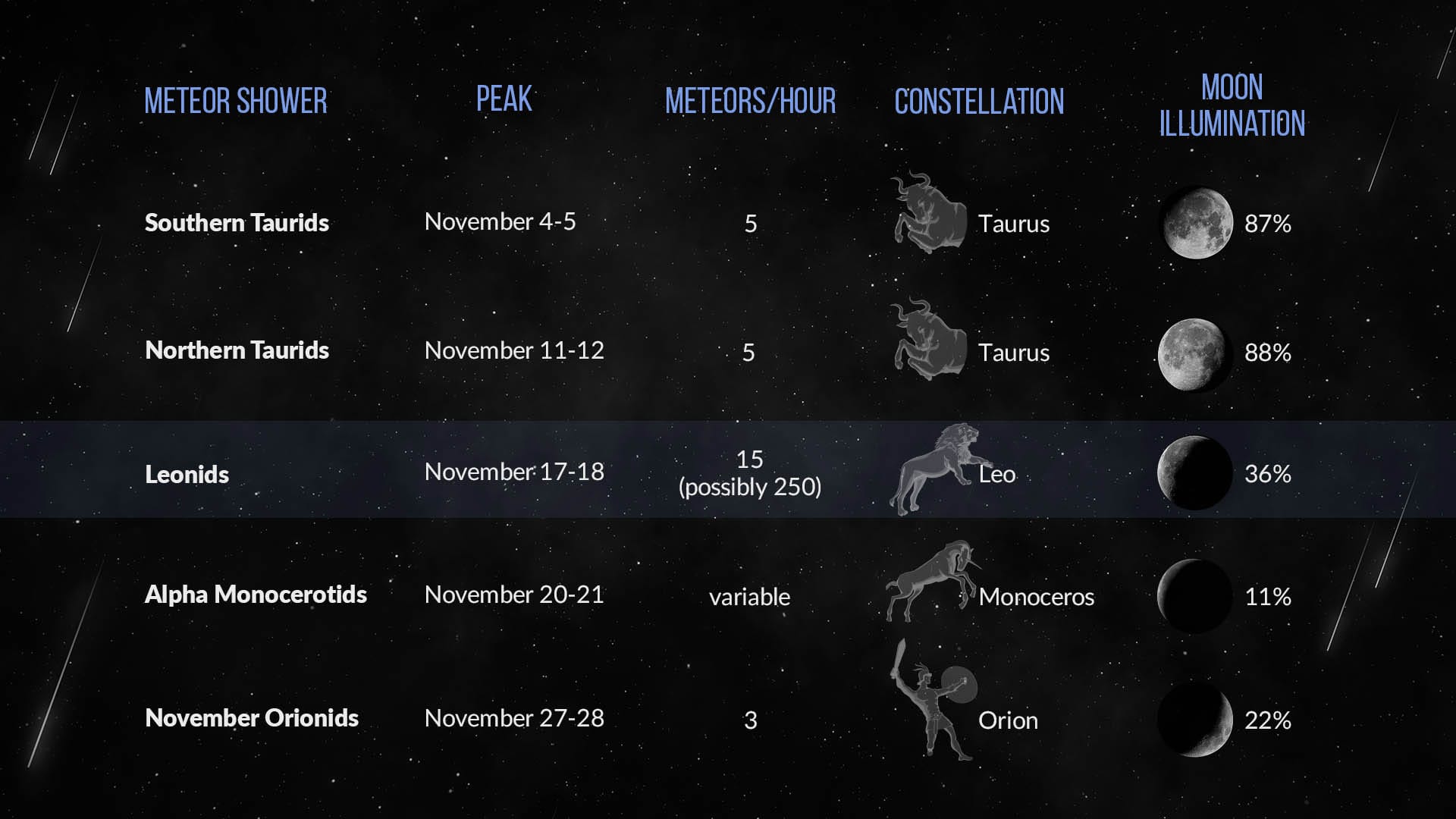 Usually, November can’t boast prolific meteor showers, but this year it might surprise stargazers. Here’s a list of five showers reaching their peaks of activity this month.

We also recommend you to read our earlier article if you want to get useful tips on observing meteors.

The Southern Taurids have already peaked on October 10, and soon we’ll witness another peak of their activity. This meteor shower is one of the two branches of the large Taurids meteor stream, which is associated with comet Encke. The Southern Taurids are quite a weak meteor shower that rarely produces more than five meteors per hour. Moreover, this year, the Moon will be too bright and won’t let you enjoy the shooting stars.

The Northern Taurids are also a part of the broad Taurid stream. Like its southern counterpart, this meteor shower is quite modest and probably won’t put on a spectacular show this November. Besides, the Moon that recently reached the full phase will shine too brightly in the sky. To get the best out of the Northern Taurids, start your observations at midnight when the constellation Taurus is highest in the sky.

The Leonids, associated with the comet Tempel-Tuttle, are famous for producing breathtaking meteor storms. Such storms occur about every 33 years. For instance, in 1966, observers in North America could see thousands of meteors per hour. Although most of the sources forecast a usual Leonids’ activity this year, there is a chance that we’ll see another spectacular show! For instance, NASA’s Meteoroid Environment Office (MEO) says that this stream might produce from 50 to more than 200 meteors per hour in 2022.

The dates and times for the Leonids’ peak vary in different sources. MEO writes that the peak will occur on November 10 (which might be a typo) at 21:30 GMT (4:30 p.m. EST). Astronomer Mikhail Maslov says that there will be two peaks of activity — on November 17 and 19. According to his forecast, on November 17, we’ll see a usual rate of 10 to 15 meteors, and on November 19, at around 06:00 GMT (1:00 a.m. EST), the Leonids will produce 250-300 exceptionally bright meteors per hour. Astronomer Bill Cooke also mentions an additional Leonids’ peak on November 19 (although he doesn’t say anything about an unusual outburst of activity).

A prolific meteor shower is a rare and beautiful event. In order not to miss it, we suggest you look for shooting stars on all indicated dates — November 10, 17, and 19. And follow our stargazing news to stay updated!

The parent body of Alpha Monocerotids is unknown, but it’s probably a long-period comet with an orbital period of about 500 years. Though Alpha Monocerotids have been known to show outbursts of activity with a zenithal hourly rate of more than 1,000 meteors, astronomers have provided no such forecasts for this year. Most probably, this meteor shower will produce just a few meteors per hour. But the Moon will be barely lit, so give the Alpha Monocerotids a chance as the observation conditions are favorable.

November Orionids, whose parent body is not yet confirmed, are quite a weak meteor stream with a rate of only three meteors per hour. The good thing is, during the shower’s peak, the Moon will be in the waxing crescent phase, so its light won’t pose a big problem. The highest meteor rate is expected before dawn on November 28.

Bottom line: Five meteor showers will peak in November; there is a chance that we’ll see more than 200 Leonids’ meteors per hour! To quickly find any meteor shower’s radiant in the sky or determine the Moon phase for any date, use the stargazing apps Star Walk 2 or Sky Tonight.