The Moon, Mars, and Venus Light up the Sky in Mid-July 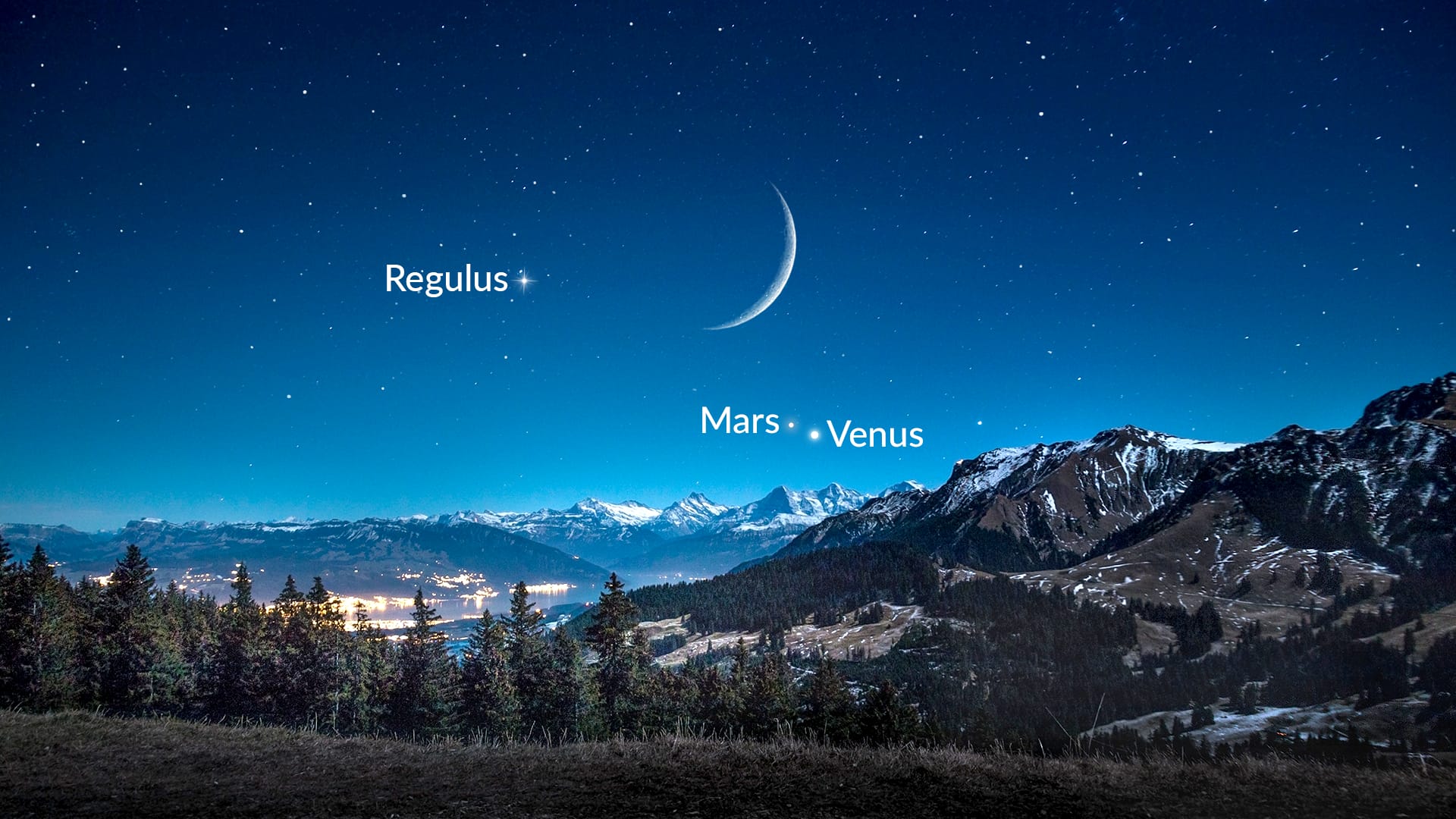 In mid-July, the Moon meets brilliant planets, Mars and Venus. Read on to find out how and when to observe noteworthy conjunctions of our natural satellite and next-door neighbors in the starry sky.

The Moon dances with Mars and Venus

Having returned to the evening sky on July 11, the young Moon is heading towards two dazzling planets, Venus and Mars. The Moon-Venus conjunction will occur first: the heavenly bodies will meet in our skies on July 12, at 05:09 a.m. EDT (09:09 GMT). Shining at a magnitude of -9.5, the 2-days-old Moon will pass 3° 15′ to the north of the brightest planet in the sky, Venus, which will be at a magnitude of -3.9.

The same day, about an hour later — at 06:10 a.m. EDT (10:10 GMT) — the Moon-Mars conjunction will happen. Our natural satellite will pass 3° 46′ to the north of the Red Planet that will shine at a magnitude of 1.8. Note that although we mention the exact time of conjunctions, it is not the only moment when celestial objects can be seen close to each other in the sky.

Look for the gorgeous trio of the waxing crescent Moon, Mars, and Venus above the western horizon after sunset. To quickly find the heavenly bodies in the sky above you, use the stargazing guide Star Walk 2: type "Venus" or "Mars" in the search field, select the corresponding search result, and enjoy! Moreover, with the Time Machine feature, you can easily plan your observations: touch and hold the clock icon and rewind time forward (or backward) to see the representation of the sky at different times.

The conjunction of Mars and Venus

The next day, two inner planets, Venus and Mars, will pair up in the evening sky. The Venus-Mars conjunction will occur on July 13, at 03:08 a.m. EDT (07:08 GMT): at this moment, the planets will share the same right ascension, with Venus passing 0° 29′ to the north of Mars.

The bright planets will be close enough in the sky to fit within the field of view of binoculars. You can also observe them with the naked eye. Look for Venus and Mars in the western part of the sky after sunset. In the mid-northern and far-northern latitudes, the duo will sink below the horizon before nightfall. In contrast, observers from the Southern Hemisphere will be able to enjoy Venus and Mars longer: the planets will set after nightfall in this part of the Earth.

Remember that although the celestial objects appear close to each other in our skies during conjunction, they are not close in space. By the way, which planet is closer to the Earth, Venus or Mars? Both planets are our immediate neighbors in the Solar System; still, dazzling Venus gets closer to the Earth than Mars or any other planet. It can approach the Earth at about 23 million miles (38 million kilometers), while the minimum distance between Mars and our planet is about 33 million miles (55 million kilometers).

One more spectacular object to see in the western twilight sky these days is the one and only first-magnitude star in the constellation Leo — Regulus. This blazing star will participate in a series of fascinating conjunctions this month: keep an eye on Regulus to see it pairing up with the Moon, Venus, and Mars in the July sky. Also, these few days after the New Moon, observe the pale earthshine — a subtle glow lighting up the Moon's dark part.

Thanks for reading this article! If you liked it, please share it with your friends, and don’t hesitate to send us your photos of the Moon, Venus, Mars, or Regulus. We wish you clear skies and happy observations!