The Moon, Mars And Neptune Meet Before Dawn 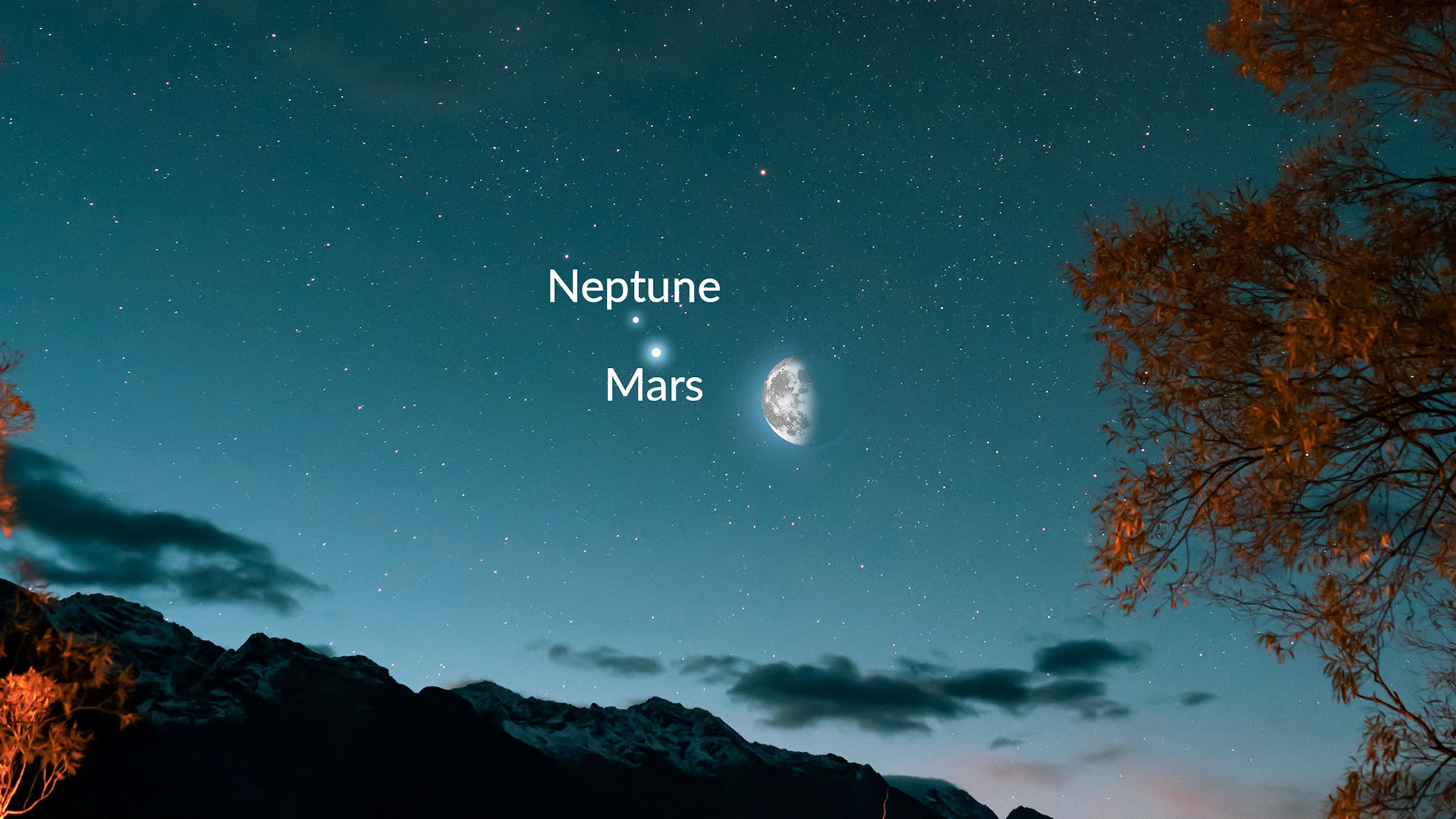 This week, skywatchers can see a close approach of the Moon and the red planet Mars. A pair of good binoculars or a small telescope will also show the distant planet Neptune sitting very close to Mars. Read on to find out how, where and when to see these objects together in the sky.

See the Moon and Mars together before dawn

The Moon and the reddish planet Mars will meet up in the predawn sky on June 12 and 13, 2020, passing within 2°32' of each other. The pair will be located in the constellation of Aquarius above the southeastern horizon. Mars will shine brightly at a magnitude of about -0.2, and the half-illuminated Moon will be at a magnitude -11.8. You will easily see the red planet with the naked eye in the dark and clear sky. Both objects will fit into the field of view of binoculars, offering a lovely photo opportunity. Neptune will share the sky with Mars and the Moon these mornings, but you will need an optical aid to see the distant planet.

To find out the rise and set times for the Moon and Mars for your location and to easily locate celestial bodies in the sky, consult the stargazing app Star Walk 2.

Do not confuse Mars with the 1st-magnitude star Fomalhaut, which is the brightest star in the constellation of Piscis Austrinus and one of the brightest stars in the sky. Mars will be closer to our natural satellite, shining about 3.5 times brighter than Fomalhaut.

Conjunction of Mars and Neptune

Mars and Neptune will be in conjunction on June 12, 2020, with Mars passing 1°44' degrees to the south of the dim and distant Neptune. In the early mornings of Friday and Saturday, June 12 and 13, the Moon, Mars and Neptune will appear close together in the sky. Nevertheless, to see all three objects, you will need a small telescope or binoculars. The bright reddish Mars will outshine the dim blue Neptune (whose magnitude is 7.9) by nearly 1,700 times.

Locating objects that are not easily visible to the unaided eye can be challenging, so use the Star Walk 2 app to determine where to look in the sky to find Neptune near Mars.

For naked-eye observers, Mars will appear in the sky as a reddish dot. It will be visible until daybreak. The red planet is getting ever brighter in the sky, as Earth is traveling towards it this summer. By mid-August 2020, Mars will outshine the brightest star in the entire night sky – Sirius. By October of this year, Mars will become brighter than Jupiter, which is usually the fourth brightest object in the sky after the Sun, the Moon and the dazzling planet Venus.

Follow our news, and you will never miss the most exciting and noteworthy astronomical events.