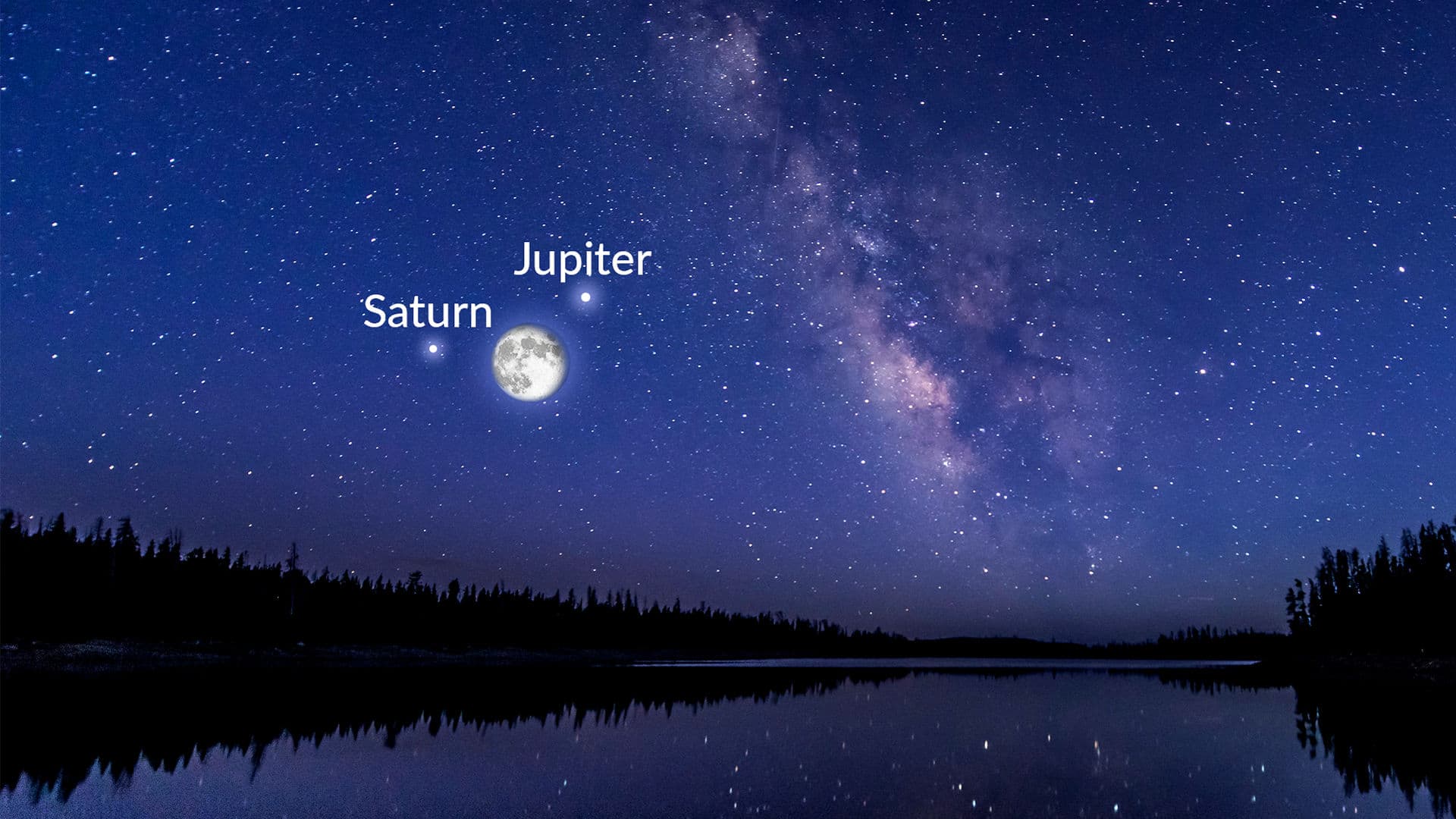 In early July 2020, our natural satellite will begin to make its close approaches to planets from the perspective of observers from Earth. The first planets to appear in close vicinity of the Moon are the gas giants Jupiter and Saturn. Read on to learn how, when, and where to see the bright trio in the night sky.

In addition to the penumbral lunar eclipse, the so-called Buck Moon Eclipse, another celestial event will take place on the nights of July 4, 5 and 6, 2020, and will be visible worldwide. These days, July’s Full Buck Moon will shine near the bright king of planets Jupiter and the ringed planet Saturn. On the night of July 5, skywatchers all over the world will see a close approach of the Moon and the two gas giants with their naked eyes. First, the Moon will approach Jupiter. The two objects appear within 1°51′ of each other. Next, Earth’s satellite will move on to visit Saturn. They’ll appear within 2°27′ of each other.

For observers in some parts of the world, these three celestial objects will form a triangle in the night sky. They will shine near the stars of constellations Sagittarius and Capricornus. The Moon, Jupiter, and Saturn will fit within the field of view of binoculars and offer a lovely photo opportunity.

The stargazing app Star Walk 2 can help you determine the optimal viewing time for your current location and find celestial objects in the sky.

Jupiter and Saturn are currently dancing together in the sky from about 10 p.m. in your local time zone until dawn. The dazzling, white Jupiter rises first, followed by dimmer, yellowish Saturn about 15 minutes later. Jupiter is the fourth brightest object in the sky. Only the Sun, the Moon, and the brilliant Venus outshine it. For the rest of this year, the two gas giants will sit close to each other in the sky. Although Jupiter is much brighter than Saturn, both planets are visible to the naked eye.

With binoculars, you can find and see Jupiter’s four large Galilean moons: Io, Europa, Ganymede, and Callisto near the planet. A medium-sized telescope will reveal brown equatorial belts and the famous Great Red Spot of Jupiter, and a small telescope should help you take a look at Saturn's rings and its largest moon called Titan.

The gas giants of the Solar system, Jupiter and Saturn, are now near their peak brightness. Later in July, both planets will reach their oppositions – Jupiter on July 13-14 and Saturn on July 20-21. The opposition is the best time to observe a planet because it is then at its nearest point to Earth and in its full phase. In order not to miss the oppositions of Jupiter and Saturn and other astronomical events, turn the Star Walk 2 notifications on.