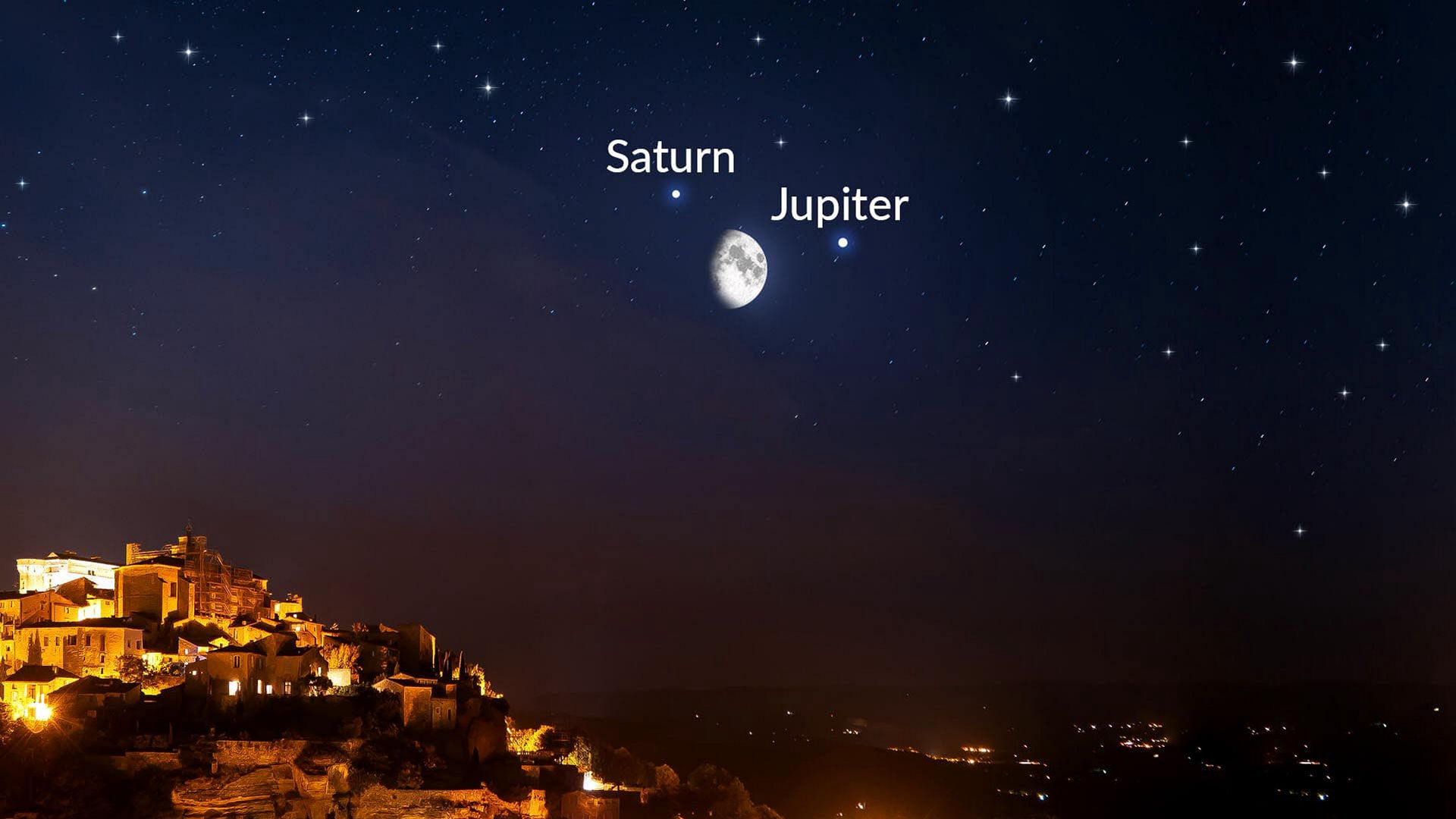 On Friday, September 25, the Moon will join two bright gas giants of the Solar system, Jupiter and Saturn, shining in the constellation Sagittarius. Learn how and when to observe this prominent trio and the stars surrounding it in the sky above you.

Conjunction of the Moon, Jupiter, and Saturn

Having completed the first quarter of its orbit around the Earth on Thursday, September 24, 2020, the Moon is going to visit two bright gas giants, Jupiter and Saturn. The conjunction of the Moon and the largest planet of the Solar System, Jupiter, will happen on Friday, September 25, 2020, at 2:48 a.m. EDT (06:48 GMT). Saturn will join them on the same day at 4:38 p.m. EDT (20:38 GMT). The Moon will shine at a magnitude of -12.1, while brilliant Jupiter and yellowish Saturn will be at a magnitude of -2.4 and 0.2, respectively.

As the evening sky darkens, look for the dazzling trio of the Moon and gas giants among the stars of the constellation Sagittarius. The conjunctions of the Moon, Jupiter, and Saturn provide the observers with the opportunity to make beautiful wide-field photographs. Also, good binoculars or an amateur telescope will allow you to enjoy Jupiter’s Galilean moons and its Great Red Spot as well as Saturn's fascinating rings.

The stargazing guide Star Walk 2 will help you not to miss the conjunction of the Moon, Jupiter, and Saturn: just turn the app’s notifications on. Moreover, with Star Walk 2, you can easily spot the bright trio in the sky, determine the best viewing time, and get a lot of interesting information on these celestial objects. Activate the AR Mode in the Star Walk 2 app to enjoy the Moon, Jupiter, Saturn, and other space objects shining over your current location.

This month you can observe the bright trio of the Moon, Jupiter, and Saturn shining in the constellation Sagittarius. The constellation represents a mythological creature called centaur — half-man and half-horse; the Babylonians associated Sagittarius with Nergal, the god of war and the underworld, the king of sunset. Below, we'll list the five brightest stars of this constellation.

Take a tour of the constellation Sagittarius and its stars with Star Walk 2: type the name of one of these objects in the search field, and the application will show you its position in the sky. To learn more interesting facts about it, just tap on its name in the lower part of your screen.