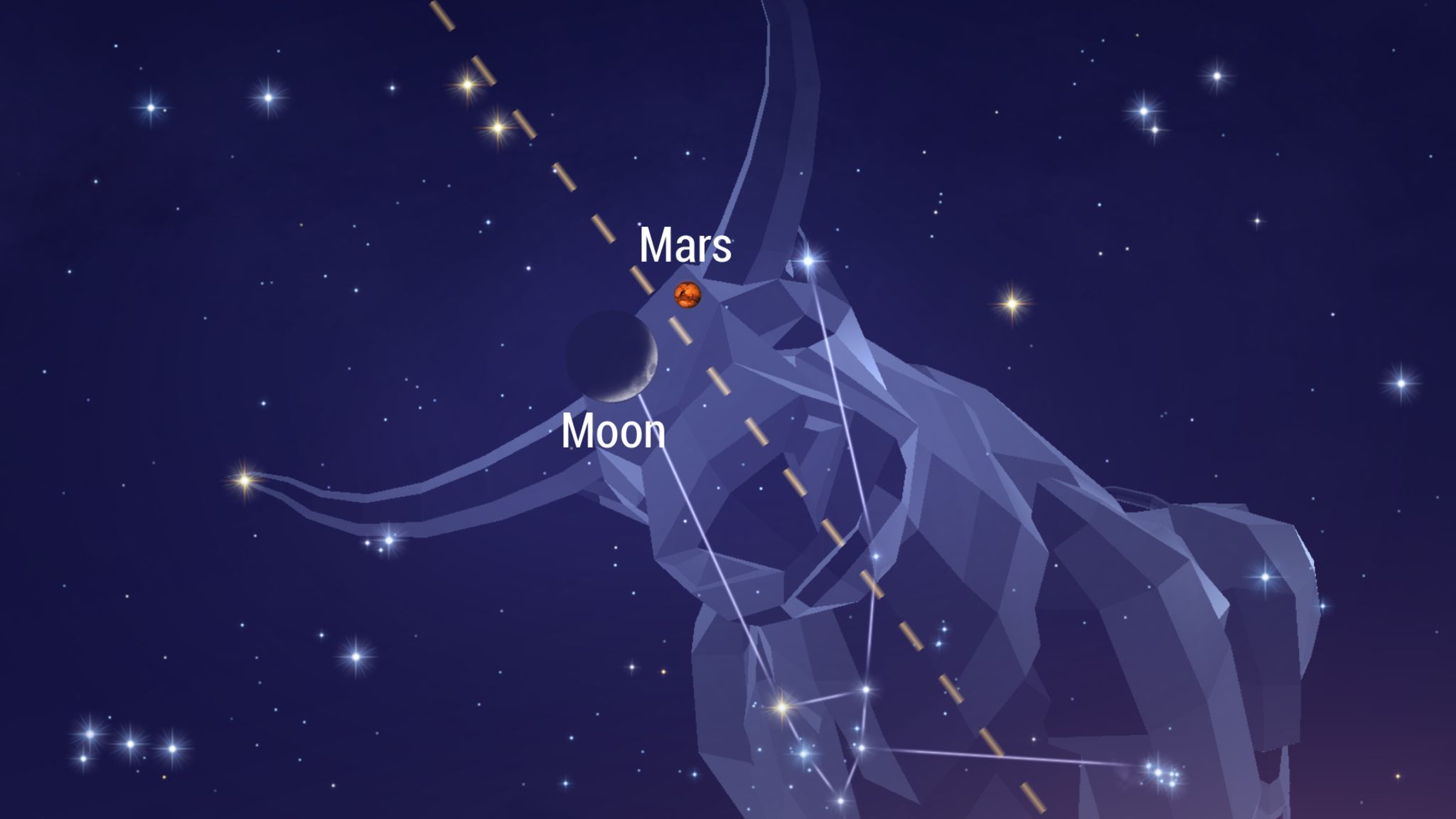 The next two weeks of May will be an ideal period to view our natural satellite’s rugged terrain in binoculars and backyard telescopes at a convenient time of the evening. From New Moon phase, the young crescent moon will appear low over the western horizon for a short time after sunset. Then, the moon will set later - climbing higher while waxing fuller. As the moon waxes, the sun is rising over its eastern horizon.

On Tuesday evening, the waxing crescent moon will land 3.5 finger widths to the lower left (south) of reddish Mars. Look for a medium-bright star named Zeta Tauri (ζ Tauri) aka Tianguan positioned close to the upper, northern tip of the moon’s crescent. That star marks the eastern horn of Taurus, the Bull. The Moon and Mars will be too widely separated to fit within the field of view of a telescope, but will be visible to the naked eye or through a pair of binoculars. At around the same time, the two objects will also share the same right ascension – called a conjunction.

Mars will continue to be visible for about an hour after dusk every evening this week. Even though Mars will be setting in the west just before midnight local time, it’s starting to dip into the twilight. Once the sky has darkened, look for Mars as a medium-bright, reddish pinpoint of light sitting less than one-third of the way up the western sky.

The moon will pass through the twins of Gemini on Wednesday and Thursday. Then, on Friday the nearly first quarter moon will pass almost directly through the large open star cluster in Cancer (the Crab) known as the Beehive, Praesepe, and Messier 44. The moon will be centered on the cluster at approximately 10 pm EDT. Binoculars or a telescope at low magnification will show both the moon and the cluster at the same time. On Saturday night the moon will reach a 90° angle with respect to the sun, triggering its First Quarter phase worldwide. The moon will end the week below the stars of Leo (the Lion) next Sunday night.

Look for yellowish Saturn, which will be rising about 2 hours after Jupiter all summer, sitting about 2.5 outstretched fist diameters to the lower left (east) of Jupiter in the pre-dawn sky. Saturn will officially enter the evening sky in the last week of May. Dust off your telescope because even a small telescope will show its rings.

Distant and dim, blue Neptune is in the southeastern pre-dawn sky, among the stars of Aquarius (the Water-Bearer). The planet will rise a little before 4 am local time.

Venus tends to be easy to see because of its extreme brightness. But our sister planet is approaching the pre-dawn sun now, so you will need a wide-open eastern horizon to see it just before sunrise. Venus will rise at about 5 am local time and remain visible until about 6 am. It will soon disappear in solar conjunction.

NASA’s Lucy spacecraft launches soon. It will study the asteroids in the orbit of Jupiter and help us learn more about the evolution of the Solar System.