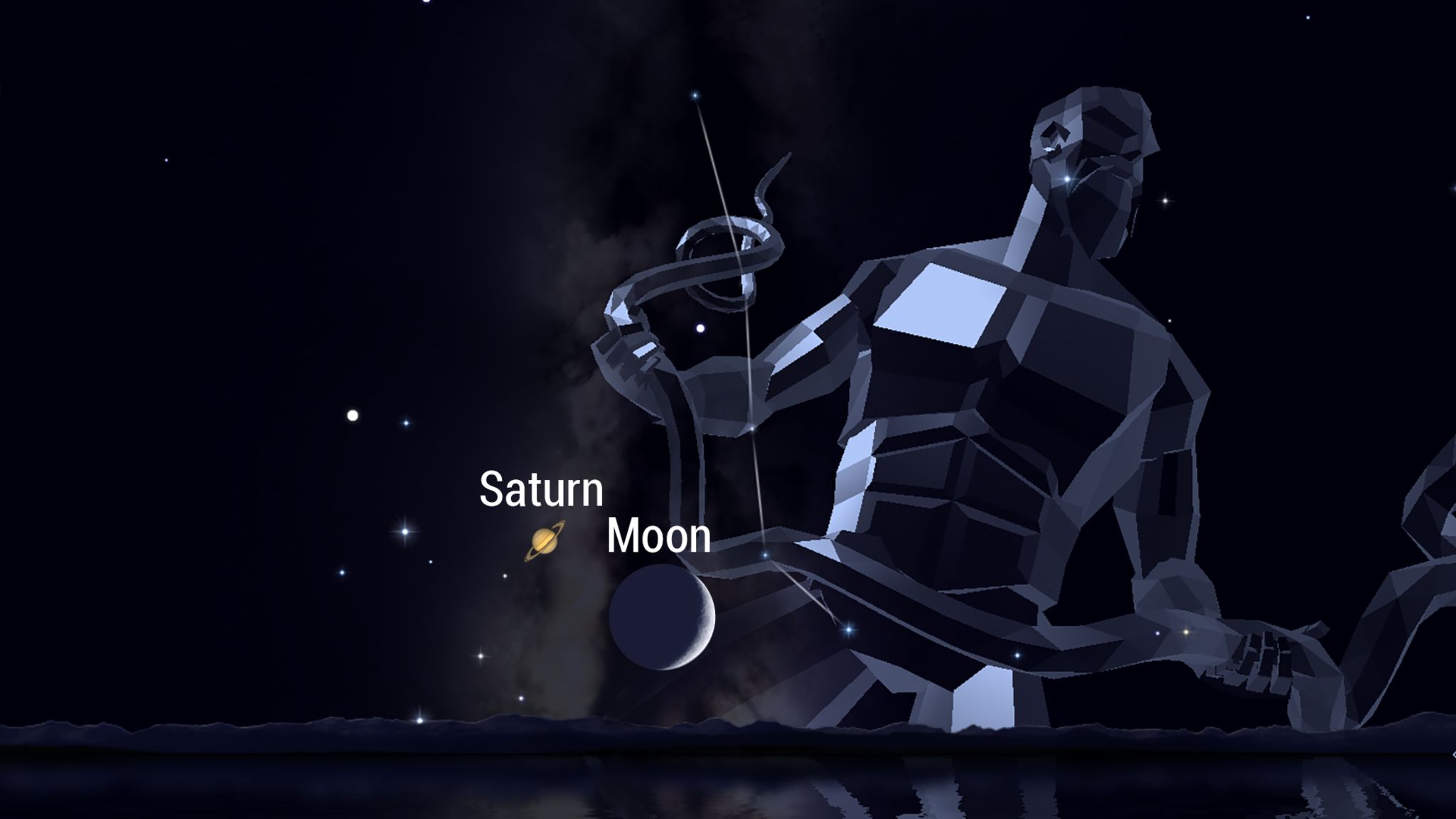 On the coming weekend, the waxing moon will visit yellowish Saturn, which has been spending this year near the Teapot-shaped stars of Sagittarius (the Archer). The ringed planet will appear as a medium-bright, yellowish dot sitting relatively low in the southwestern sky after dusk. The moon will sit nearly a fist’s diameter to Saturn’s lower right on Saturday and just a few finger widths to Saturn’s upper left on Sunday. Whether it’s being “mooned” or not, Saturn will set before just 8 pm local time this week.

After the sky has darkened, even a small telescope should be able to show you some of Saturn’s larger moons, especially its largest satellite, Titan. Using a clock’s dial analogy, Titan will move counter-clockwise over the course of this week – starting from a position at 10 o’clock (to the upper left of Saturn) tonight, and ending up next Sunday at 4 o’clock (to the lower right of Saturn). (Remember that your telescope might flip and/or invert the view. Use the moon to find out how your telescope changes things and keep a note of it since that will always be the case.)

Even though it is gradually dimming as Earth pulls farther away from it, reddish Mars will continue to dominate the southern evening sky this week. Mars will set in the west at about midnight local time.

Mars’ orbital motion has been carrying it eastward towards distant Neptune, which is less than two fist diameters to the left (east) of Mars now. The blue, ice giant planet is visible from dusk until just after 1:30 am local time. Using a decent quality telescope you can see the magnitude 7.8 planet sitting roughly midway between the modestly bright star Phi (φ) Aquarii and the brighter star Hydor (Lambda Aquarii). Neptune will highest in the sky (and best viewing conditions) at about 8 pm local time.

Blue-green Uranus is farther to the east than Neptune. It’s still close to its peak brightness (magnitude 5.7) and size for this year. You can see it without optical aid under very dark skies, but binoculars and telescopes will work better. By mid-evening, Uranus will be high enough in the eastern sky to see it clearly. Look for it about 2 finger widths to the left (east) of the modestly bright star Torcular (Omega Piscium). That star sits a generous palm’s width above the “V” where the two starry cords of Pisces (the Fishes) meet. The planet will be carried higher in the sky until 11 pm local time.